In India, specially 3G data is so costly that every user can not afford 3G internet. So, 90% of users in India are still using 2G networks of various types of network providers e.g. Idea, Reliance, Vodafone, BSNL, Tata Indicom, Tata Docomo, Uninor, Airtel, Aircel, etc. But, speed is too bad in the 2G network. Either you are using through mobile or computer or laptop. Because 2G speed is bad various users are facing problems, and in my previous article I have tried to recover the speed using some tips and tricks. Today, we are introducing her one software named Robust Internet Speed Booster which is totally free and you can utilize to speed up your internet connection. Robust Internet Speed Booster Freeware can be downloaded from the link which is provided at the end of the article. 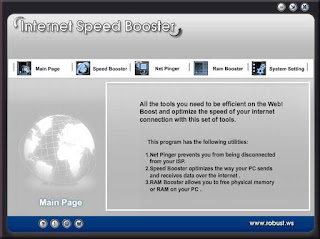